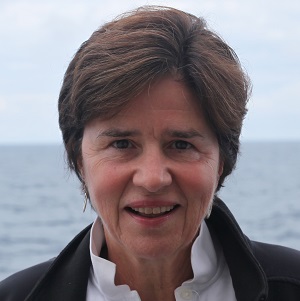 In 1956, LIFE magazine featured on one of its front covers a beautiful American family – mother, father, daughter, son – all leaping into the air in joy and tossing items of plastic over their shoulders. The headline read Plastic saves time (which, of course, could also be understood as Plastic saves money). Sixty plus years later, we are surprised to find that much of the plastic we have been discarding in the intervening years can now be found in the ocean but, quite honestly, where did we think it was going to go?

Little more than a decade after the appearance of that iconic LIFE cover illustration, astronauts were for the first time able to take pictures of the Earth from space. We remain fascinated by these photographs but rarely stop to contemplate the significance of two of the most obvious features they reveal about our home. Firstly, they show clearly that our ancestors were wrong to refer to this planet as “earth” – a more fitting name would have been water or ocean as fully 71% of the Earth’s surface is covered by ocean.

The other earth characteristic revealed in these photos is that our planet is not connected to any other. The Earth is not equipped with an umbilical cord and that leads to two clear conclusions:

The Sustainable Development Goals, SDGs, represent a milestone in the way we regard the development of human societies in that they acknowledge the finite nature of the Earth’s resources (including its ability to act as a waste receptacle) and upon which we are entirely dependent. Instead of focusing exclusively on the betterment of the human condition as has been the case for previous global development initiatives, the SDGs include a new vision for our relationship with the Earth, its resources and the organisms with whom we share these resources. In many respects, the 2030 Agenda can be regarded as a vision for how we want to share these resources among all the Earth’s inhabitants and their descendants.

SDG 14 “Life below water” focuses on the ocean and the organisms it supports. As land-dwelling organisms, we tend to forget how important the ocean is for us but, without it, we could not survive! It stores and transports the heat energy driving the climate system. It regulates greenhouse (and other, including oxygen) gas concentrations in the atmosphere, and it drives the Earth’s water cycle, thus controlling precipitation patterns. Major changes in ocean condition would, therefore, generate enormous changes in the conditions for life on the Earth as a whole and human activities are dramatically changing the ocean!

Many of the targets in SDG 14 focus on activities occurring in or near the ocean, especially fisheries. This focus is important as fisheries alter not only the numbers and distributions of organisms but also food webs and energy flow in the ocean. It is, however, when we use the ocean as a waste receptacle that we most dramatically change ocean conditions.

Much of the physical (litter), chemical (pollution) and gaseous waste (almost one third of the CO2 waste emitted to the atmosphere since the industrial revolution is now in the ocean and is fundamentally changing ocean chemistry) we produce on land ultimately ends in the ocean. Oil spills at sea generate public outrage but most of the oil entering the ocean, by far, comes via rivers and can be traced back to our everyday activities on land. That means that contributions from every person, business and community, regardless of how far they may be located from the ocean, are essential for meeting the targets of SDG 14!