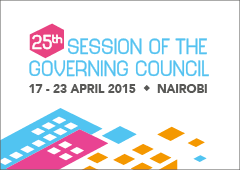 25th Session of the Governing Council

Link to website
The Governing Council is an intergovernmental decision – making body for the United Nations Human Settlements Programme (UN-Habitat). It meets biennially and reports to the General Assembly of the United Nations through the Economic and Social Council, particularly on programmatic issues. The Theme of the 25th Session of the Governing Council will be: “UN-Habitat’s Contribution to the Post-2015 Development Agenda in Order to Promote Sustainable Urban Development and Human Settlements”

The GC25 has two sub-themes as follows;
1.Enhancing Urban-Rural Linkages Across the Continuum of Human Settlements to Harness the Transformative Power of Urbanization for Sustainable Development
2.UN-Habitat’s Role in the Post-2015 Development Agenda

Other key issues to be discussed at the twenty-fifth session include:
1.The activities of UN-Habitat, including coordination matters
2.The work programme and budget of UN-Habitat for the biennium 2016-2017