December 2022 - You are accessing an archived version of our website. This website is no longer maintained or updated. The Sustainable Development Knowledge Platform has been migrated here: https://sdgs.un.org/ 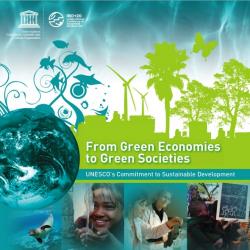 This report from UNESCO recognises that there are increasing social disparities and inequity in the world, alongside population growth, climate change, the deterioration and pollution of the environment, the unsustainable use of freshwater and depletion of ocean resources, as well as increasing cases of natural and human‐made disasters. The report reveals UNESCO’s vision that aims to counter the above challenges by providing a ‘new way forward’ through the development of an inclusive green society and economy. The report identifies five priority areas for UNESCO in the transition to a green economy. These are:

- Education: the report states that education is one of the best weapons to fight poverty and inequality and can foster the attitudes and behaviours necessary for a new culture of sustainability.

- Science: UNESCO identifies that science, technology and innovation can and must drive the pursuit of more equitable and sustainable development.

- Culture: the report recognises that new approaches will only work if they match the context and so culture must be built into development from the start.

- Information: the green transition will rely on the media to enable governments to create policy for sustainable development and act on it. Media can raise public awareness of these issues and build solidarity.

- Oceans: the report identifies that oceans make the world habitable for people and so there must be renewed effort to manage the world’s water systems in a new green economy.

UNESCO also detail their roadmap to a sustainable world which incorporates the above elements as well as disaster preparedness, conservation of biodiversity, and improving governance for sustainable development.