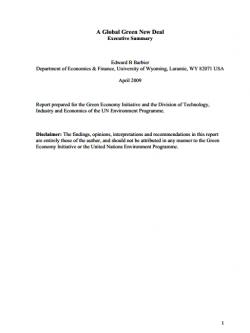 This report was commissioned by UNEP in response to the multiple global crises of 2008 – fuel, food and financial. The report proposes a mix of policy actions that would stimulate economic recovery and at the same time improve the sustainability of the world economy. The Global Green New Deal (GGND) calls on governments to allocate a significant share of stimulus funding to green sectors and sets out three objectives: (i) economic recovery; (ii) poverty eradication; and (iii) reduced carbon emissions and ecosystem degradation; and proposed a framework for green stimulus programs as well as supportive domestic and international policies.

National actions proposed for the GGND include:

• US, the EU and other high income OECD economies, as well as middle and high income economies of the G20, should spend over 2 years at least 1% of their GDP on reducing carbon dependency;

• Developing economies should also implement national actions proposed for reducing carbon dependencies, should spend at least 1% of GDP on improving clean water and sanitation for the poor, should develop safety net programs and health and educational services, and should adopt other national actions for improving sustainability of their primary production activities.

• All economies should consider removing water subsidies and other distortions, adopting market‐based instruments or similar measures to enhance water management.