Message from the Chair

Dr. John W. Ashe was elected Chairman of the thirteenth session of the Commission on Sustainable Development (CSD-13), a session which will focus on the thematic cluster of water, sanitation and human settlements, and which will complete the second or Policy year of the first two-year (2004-2005) Implementation Cycle of the CSD.

As Chairman, Dr. Ashe will oversee the Commission's negotiations on measures to speed up implementation and mobilize action to overcome obstacles and constraints, and build on lessons learned in the focal areas of the thematic cluster issues which were highlighted by participants during the "Review year" that was CSD-12.

Dr. Ashe's chairmanship caps a long association with the Commission, on which he has served in various capacities. He was a member of the Bureaux of CSD-1 and CSD-7, and was Vice-President of the Bureau of the Johannesburg Summit. Dr. Ashe also possesses an intimate knowledge of the negotiating atmosphere of the CSD, having chaired negotiations on finance, energy, SIDS and the Means of Implementation chapter of the Johannesburg Plan of Implementation.

Dr. Ashe is Antigua and Barbuda's Permanent Representative to the United Nations, its Ambassador to the World Trade Organization and has Ministerial Responsibility for Sustainable Development Matters and the WTO. He has also served as Vice-Chairman of the Executive Boards of UNDP/UNFPA and UNICEF; Chairman of the Executive Board of the Clean Development Mechanism of the Kyoto Protocol; Chairman of the UNFCCC's Subsidiary Body on Implementation; and Chairman of negotiations on budgetary and administrative matters within the CBD, UNCCD, the Basel Convention, and the Montreal Protocol.

Dr. Ashe is a citizen of Antigua and Barbuda and holds a Ph.D in Bioengineering from the University of Pennsylvania. He is married with two children.

Ms. Husniyya Mammadova joined the Permanent Mission of the Republic of Azerbaijan to the United Nations, New York in 2003. Prior to this post, she was working in the Ministry of Foreign Affairs of the Republic of Azerbaijan in the Department of Human Resource Management. Then, she worked at the Department of Economic Cooperation and Development. In the latter, she was handling the Second Committee and ECOSOC.

Her previous professional experience includes consultancy at the National Interagency Task Force on the elaboration of PRSP. Her expertise involves: advisor on sustainable development issues; participant of the national preparatory process to the World Summit on Sustainable Development; and a consultant on the elaboration of the very first national report on the implementation of Agenda 21.

Ms. Mammadova holds a bachelor degree in Economics from the Western University, Azerbaijan and diploma with honors from the Vienna Diplomatic Academy. 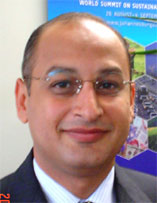 Mr. Khaled Elbakly started his diplomatic career in January 1985 and served in the diplomatic missions of Egypt in Romania, Italy and Ethiopia. He joined the Permanent Mission of Egypt to the United Nations in New York in the position of Counsellor in September 2003.

Mr. Elbakly participated as a member of the Egyptian delegation in a number of regional and international conferences, including the World Food Summit in Rome in 1996, the International Labour Organisation meetings in Geneva in 1997 and the First Meeting of the Committee on Sustainable Development for the African region in Addis Ababa in 1999. He also attended various expert and ministerial meetings of the Economic Commission for Africa and the African Union (formerly OAU) during the period of 1997-2001. Most recently, he participated in the UNEP Eighth Special Session of the Governing Council/Global Ministerial Environment Forum held in Jeju, Republic of Korea, in March 2004, and the Global Environment Facility Council meeting in May 2004.

From 2001 to 2003, Mr. Elbakly worked in the office of the Minister of State for Foreign Affairs, supervising, among other issues, matters related to NEPAD and international cooperation.

Ms. Dagmara Berbalk is Head of Division at the German Federal Ministry of Environment, Nature Conservation and Nuclear Safety which is based in Berlin and Bonn and is in charge of national and international water policy issues.

In this capacity, she represented the German Federal government as one of the conveners of the International Conference on Freshwater in Bonn, December 2001.

She has been with the Ministry of Environment since its establishment in 1986 and has a long career experience in managing German environmental and sustainable development policy. Her areas of responsibility has covered protection of the marine environment, waste management, international relations with the European Union, the OECD, the CSD, UNEP and others.

Prior to her current position she was in charge of international cooperation with the United Nations agencies and developing countries on environment and sustainable development issues during which she was the chief negotiator for the European Union during the German Presidency in 1999. Ms. Dagmara Berbalk is a lawyer by profession.

Mr. Boo Nam Shin is Counsellor for Environment and Development in the Permanent Mission of the Republic of Korea to the United Nations.

Prior to his current assignment in New York, Mr. Shin was Director of Economic Cooperation, Ministry of Foreign Affairs and Trade.

Mr. Shin participated as a member of the delegation of the Republic of Korea in the World Summit on Sustainable Development in 2002.

In other diplomatic postings, Mr. Shin served as Second Secretary in the Permanent Mission of the Republic of Korea to the United Nations Office in Geneva.

Mr. Shin holds an MA in International Relations from Boston University and a BA in German Literature from Seoul National University.