The Annual Global Multi-Stakeholder Small Island Developing States (SIDS) Partnership Dialogue (the “Global Dialogue”), is an Event organized annually under the auspices of the SIDS Partnerships Framework and co-chaired by the Co-Chair of the UN Steering Committee on SIDS Partnerships. The 2020 Global Dialogue will be the 6th of such gathering since the establishment of the Framework in 2016. The Event will take place on 10 July 2020, 3:00pm to 6:00pm, via an online platform, in the margin of the 2020 session of the High-level Political Forum on Sustainable Development (HLPF).

The annual Global Multi-stakeholder Small Island Developing States (SIDS) Partnership Dialogue took place on 10 July 2019, on the margins of the UN High-level Political Forum on Sustainable Development. The event focused on effective partnerships for addressing gaps and priority areas of the SAMOA Pathway.

The 2018 Global Multi-stakeholder Small Island Developing States (SIDS) Partnership Dialogue (the “Dialogue”) took place on 12 July 2018, in the ECOSOC Chamber at United Nations Headquarters, New York. The Dialogue, held in the margins of the the 2018 High-level Political Forum on Sustainable Development (HLPF), was organized by the United Nations Department of Economic and Social Affairs (UN DESA) and the Office of the High Representative for Least Developed Countries, Landlocked Developing Countries and Small Island Developing States (OHRLLS), in close consultation with the Steering Committee on Partnerships for SIDS, co-chaired by Belize and Ireland. In line with the theme of the 2018 HLPF, “Transformation towards sustainable and resilient societies”, the Dialogue focused on how partnerships can support SIDS in their transition towards more sustainable and resilient cities and communities.

With generous funding support provided by the government of Italy, and under the overall guidance of the Steering Committee on SIDS Partnerships, currently chaired by Belize and Ireland, UN DESA is undertaking a capacity development project to support the work of the SIDS Partnership Framework and the preparatory process related to the SAMOA Pathway mid-term review. Read more here 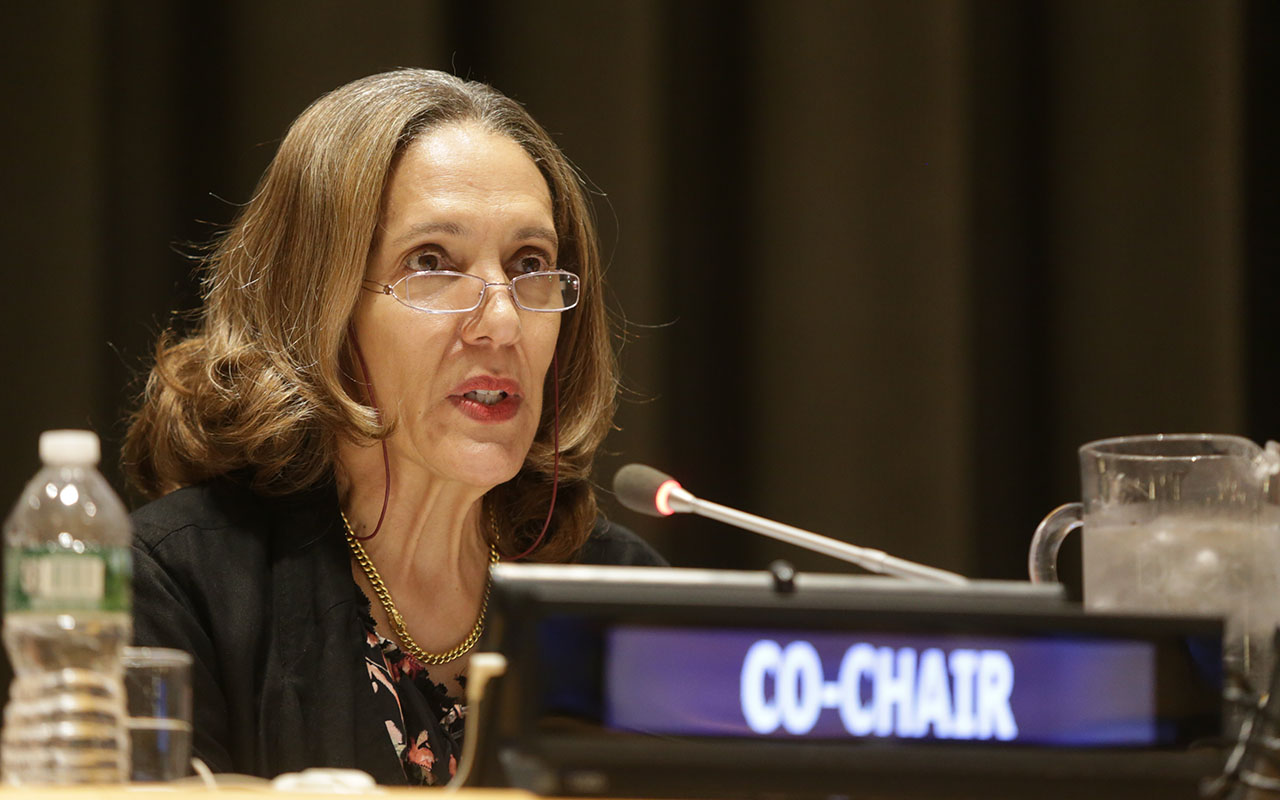 H.E. Ms. Lois M. Young, was appointed as Belize’s Permanent Representative to the United Nations in August 2012. Prior to her appointment, Ambassador Young ran a large law practice with local and international clients. She is also a Senior Counsel at the Belize Bar and has appeared several times before the Privy Council and the Caribbean Court of Justice while serving as of counsel to the Government of Belize.
H.E. Mrs. Geraldine Patricia Byrne Nason, Permanent Representative of Ireland to the United Nations 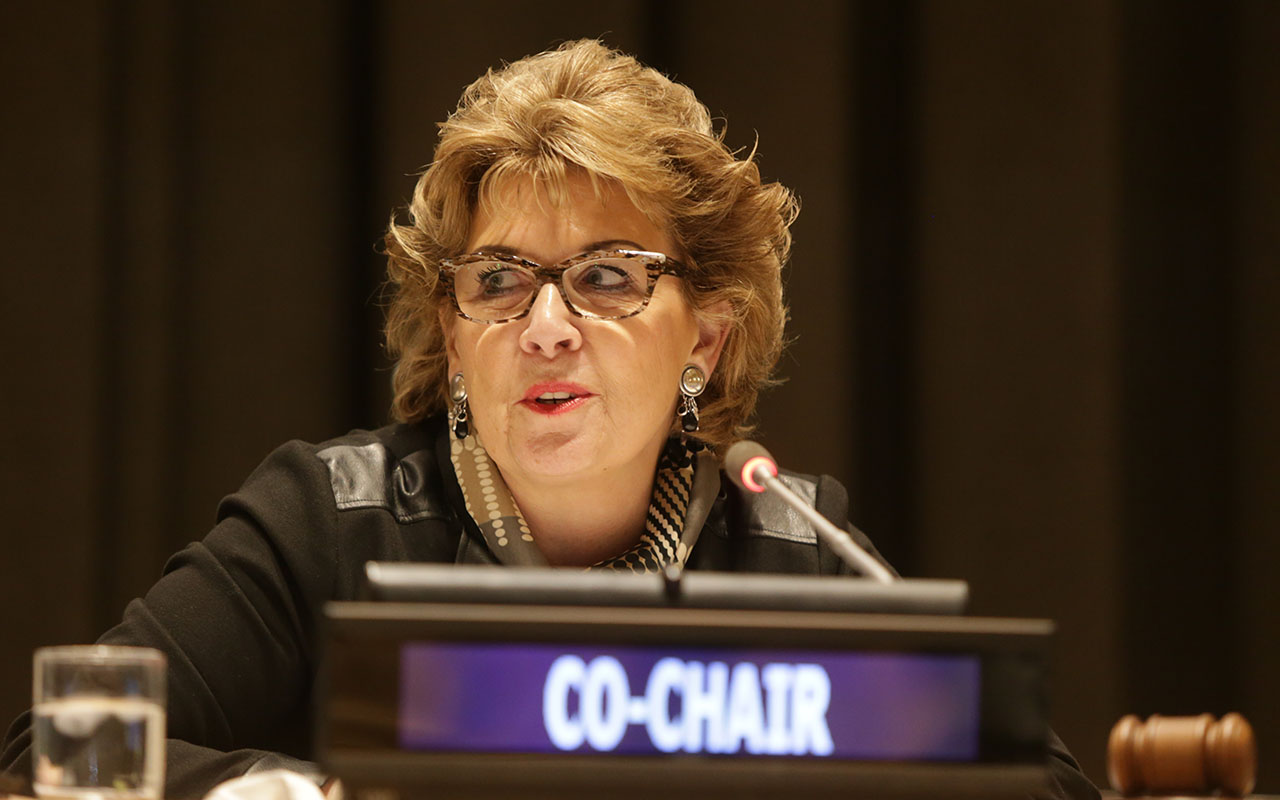 Ambassador Geraldine Byrne Nason is the Permanent Representative of Ireland to the United Nations. Geraldine is a career diplomat who has served in Brussels, New York, Paris, Vienna and Helsinki during her career. As Secretary-General in the Prime Minister’s office from 2011-2014, she was the highest ranking female public servant in Ireland. While Geraldine began her career at the UN, subsequently much of her service has been focused on Europe where she served as Ambassador to the EU, 2007 - 2011. She also headed Ireland’s National Forum on Europe and more recently was SG responsible for EU affairs. From 2014 to 2017, she served as the Ambassador to France and Monaco. In 2013 Geraldine was named in the Irish media one of Ireland’s Most Powerful Women. In 2014, she was elected a Member of the Royal Irish Academy, Ireland’s highest academic honour. She holds an Honorary Doctorate of Law from Maynooth University as well as Master’s and Bachelor’s degrees in Literature from Saint Patrick’s College in Maynooth. Ms. Byrne Nason is married and has one son.
H.E. Dr. Walton Alfonso Webson, Permanent Representative of Antigua and Barbuda to the United Nations. 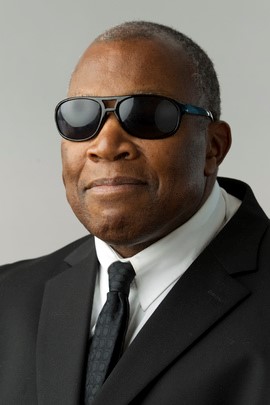 Ambassador Webson had a long career with Perkins International, serving as its Director since 2011. Prior to that, he was the organization’s Director of Institutional Development and Coordinator of Education Programs for Africa and the Caribbean.

He has also been teaching Leadership and International Management at Assumption College, Worcester, Massachusetts, since 2006. He has authored books on empowering persons with disabilities and academic papers on development, education and aspects of disability. 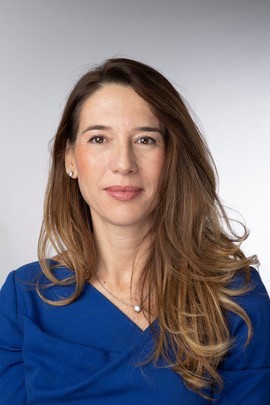 Co-chair of the Steering Committee on SIDS.

Ms. Frazier’s most recent previous appointment was in 2013, when she was named her country’s Ambassador to Italy, with concurrent accreditation to San Marino and to the Rome-based United Nations agencies.

She was previously Malta’s Ambassador to Belgium, Luxembourg and the North Atlantic Treaty Organization (NATO) until October 2013. Ms. Frazier’s first diplomatic appointment was as First Secretary in 1994, when she served as a Desk Officer for the United States and the Americas, as well as the Mediterranean Department.

Having begun her career as a student diplomat in 1992, Ms. Frazier was subsequently posted to Malta’s Embassies in Washington, D.C., Rome, Brussels and London.

Ms. Frazier holds a master’s degree in diplomatic studies from the University of Malta, as well as a bachelor’s degree in business management and French from Luther College in the United States.

She is married and has two children.

H.E. Mr. Ahmed Sareer, Permanent Representative of the Republic of Maldives to the United Nations

His Excellency Mr. Ahmed Sareer presented his Letters of Credence to His Excellency Secretary General Ban Ki-Moon, as Ambassador / Permanent Representative of the Republic of Maldives to the United Nations on 20 December 2012. Mr. Sareer is also concurrently serving as the Ambassador Extraordinary and Plenipotentiary of the Republic of Maldives to the United States of America having presented his Letters of Credence to His Excellency President Barack Obama on 14 January 2013. From December 2009 until his appointment as Ambassador / Chargé d'Affaires to the Permanent Mission of Maldives to the United Nations in February 2012, Mr. Sareer served as the High Commissioner of Maldives to the People's Republic of Bangladesh. He was Deputy High Commissioner in London, United Kingdom from June 2008 to May 2009, and served as the Charge d'Affaires, Maldives Mission to the European Union, Brussels from March to June 2008. He was the Counsellor and later the Deputy High Commissioner in Colombo, Sri Lanka from July 2006 to March 2008. As a career foreign service officer, he began his service at the Ministry Foreign Affairs in February 1986 and held various positions including Director General, Foreign Relations Department. Mr. Sareer was Director representing the Maldives at the Secretariat of the South Asian Association for Regional Cooperation (SAARC), Kathmandu from June 2000 to May 2003. Mr. Sareer served as the Second Secretary/ Charge d'Affaires at the Permanent Mission of Maldives to the United Nations, New York from September 1992 to December 1993. He also served as Third Secretary at the High Commission of Maldives in Colombo, Sri Lanka from April 1988 to February 1989. He was a representative of the Maldives Delegation to the 47th (1992), 48th (1993), 52nd (1997), 63rd (2007), 66th (2011), 67th (2012), 68th (2013), 69th (2014) and 70th (2015) Session of the United Nations General Assembly, New York. Since January 2015, the Maldives has assumed Chairmanship of the Alliance of Small Island States (AOSIS), a coalition of 44 small island and coastal nations from around the world, and Mr. Sareer has been leading the process on behalf of the Government of Maldives. Since January 2016, Mr. Sareer has been serving as Co-Chair of the Steering Committee on Partnerships for Small Island Developing States on behalf of the President of the United Nations General Assembly, constituted by the latter under UNGA resolution 70/202. After completing his secondary education in the Maldives, Mr. Sareer has undertaken further studies in Australia, where he attained a bachelor's degree in Social Sciences from the University of Canberra and a master's degree in Foreign Affairs and Trade from Monash University. He also attended a Foreign Service Training Programme conducted by the Department of Foreign Affairs and Trade, Australia. Born in Malé, Maldives on 28 August 1965, he is married and has four children.
H.E. Mr. Sebastiano Cardi, Permanent Representative of Italy to the United Nations