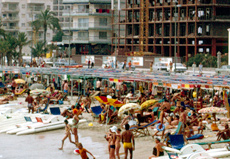 Some countries fear that patterns of modern living may lead to ecological deterioration and depletion of natural resources.

There are over three and a half billion people unevenly distributed over the world's habitable areas. The quality of their lives is to a major extent influenced by patters of population growth and density. Some countries are already facing serious problems of over-population, manifesting themselves in the form of food shortages, inadequate housing, poor health and education services, and high unemployment rates.

The threat such situations may pose to the balance between the earth's peoples and the earth's ability to support them is becoming a priority matter for universal concern and action.
Provision for Public Participation

The nine major group sectors are expected to contribute to the elaboration of the 10-year framework of programmes on sustainable consumption and production (SCP) and the Marrakech Process by:

Mechanisms for the Participation of Major Group Organizations

The mechanisms for major groups' engagement and participation emanate from Agenda 21 and the established participatory practices of the Commission on Sustainable Development (CSD).

Complementary to the CSD framework, new mechanisms to enrich the discussions at the regional and national levels and raise awareness about the 10-year framework process among the major groups, are being experimented.

At the 3rd International Expert Meeting on SCP in Stockholm (2007) two new mechanisms for the participation of major group organizations were created.

At this time, the Marrakesh Process has included three representatives of the major groups in its Advisory Committee. They represent the NGO, Workers and Trade Unions, and Business and Industry Sectors.

Currently, other major group sectors are coming forward and planning to engage more actively in the initiatives related to the elaboration of the 10-year framework of programmes on sustainable consumption and production (SCP) and the Marrakech Process. For more information you may contact directly the CSD major groups organising partners.

Partners in the Implementation of Initiatives

The role of major groups in implementation of the SCP agenda is essential and we look to them to participate actively in multi-stakeholder partnerships and joint implementation initiatives.