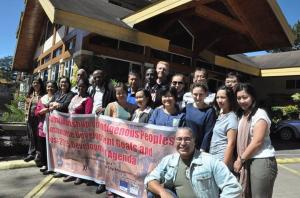 It is estimated that there are approximately 370 million Indigenous Peoples in the world, belonging to 5,000 different groups, in 90 countries worldwide. Indigenous Peoples are found in every region of the world, but about 70% of them live in Asia. Indigenous Peoples constitute about 5% of the world’s population, yet account for about 15% of the world’s poor. Examples of Indigenous Peoples include the Inuit of the Arctic, Native Americans, hunter-gatherers in the Amazon, traditional pastoralists like the Maasai in East Africa, and tribal peoples in the Philippines. While there is no universally accepted definition for “Indigenous Peoples,” there tend to be common characteristics among them, including: The Indigenous Peoples Major Group (IPMG) nominated Organizing Partners (OPs) to serve as facilitators. Within the current working structure, there are two global Organizing Partners - Tebtebba (Indigenous Peoples International Centre for Policy research and Education) and IITC (international Indian Treaty Council). The IPMG also includes regional organizing partner focal points. The IPMG maintains a global list-serve and regional list-serves moderated by the IPMG OPs and the regional OP focal points. Information sharing, feedback and recommendations are forwarded to the Global IP-OPs for consideration on proposals and position papers submitted by the IPMG to the Sustainable Development Goals and the Post2015 Development Agenda processes. Join the IPMG list-serve at http://bit.ly/IPMGSDGs
Website: www.indigenouspeoples-sdg.org/index.php/english/.
Documents
Governance
To ensure openness and transparency, Organizing Partners of each Major Group were asked to report on their activities and governance since the lead up to the Rio+20 Conference, including a written description of their selection/election criteria and a list of the organizations the Major Group consults with.
Statements